and English and by a general disregard for translation as a profession.

More than anything, Italiese is fueled by a sort of arrogance: the idea that “any” English is good enough; that English speakers should be satisfied with the most minimal effort to furnish them with “translated” materials; that translation is easy and can be done by anyone; and, once again, that language doesn’t matter much.

Not infrequently, Italiese is assisted by internet-based “translation engines” such as Google Translate and Yahoo’s Babel Fish. (See also the ProvenWrite article, “Doesn’t Matter As Long As It’s Cheap.”) To be sure, online translation programs were invented to serve a useful purpose: to help us understand websites written in languages we don’t know. Their intention is to provide the general idea of a text, but they were never meant to replace professional translation.

And yet that is increasingly how they are used.

Below are two of my favorite examples of Italiese. In both cases, the authors of the websites in question appear to have used internet-based programs as the basis for a “translation” that was considered “good enough” to put online.

I present these without comment because, really, what is there to say?

From the site of the Italian television network, RAI: 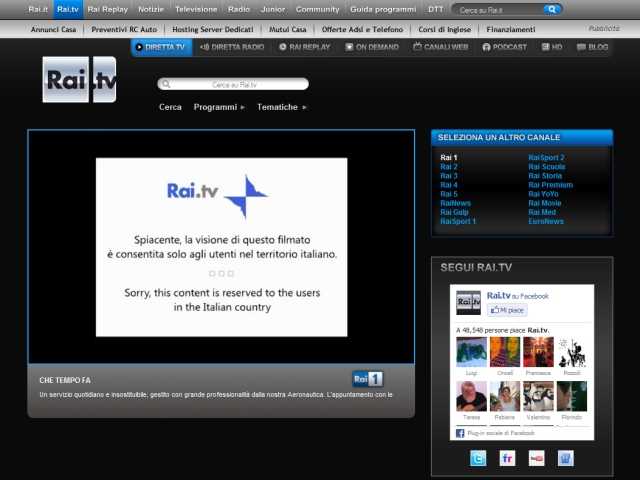 From the Tuscany Charming site:

A description of the Livorno Coast, the “Costa degli Etruschi”

Antignano
Suggestive beaches with gravelly fund, not always easily accessible, in a line of coast characterized by dark rocks. The first one is the “Beach of the Tamerice”, so-called for the presence of a historical tamerice, withdrawn by important painters as Factors, Christmases and Lomi…. Suffered to south there is the ” Beach Longa “, that as it says the name it is one of the longest of Antignano, also it in front of the street that brings the same name, that is Street Longa. Impossible besides to confuse her. Little bottom there is one of the most suggestive beaches of this territory: the “the Ballerina’s Beach”, to which is entered by the homonym park, through a carpet of in bloom margherite under the tamericis. The scaletta a spiaggetta of gravel going down is reached, surrounded by rocky faraglioni. Just one of these, before an excessive erosion, it vaguely seems a ballerina remembered, from which the name.

Calafuria
In poor words, the sea has found a hard bone. Treating of materials of different consistence, it is happened that the erosion of the wind has had resulted everything anything else other than homogeneous. Lower case letters particles of quartz brought by the wind have run over these rocks for thousand of years, getting different results where they struck. The eruptive veins were hardly grazed, while the sandstone something always surrendered. Open a passage, the partkelles penetrated to the inside in the rock and they turned in round, pushed by the wind digging more always…. The wind is always to the work and the bluff it is constantly consumed under its pressure. The beaches are few but the bluff it is often practicable and they are even there some swimming pools of brackish water, fruit of excavations passed that, with the waves, him riempiono of sea water.

From the site of the Hotel Delizia in Milan:

If a hotel to Milan tried on linens but still not succeeded to estimate the situated better offer then been visiting the just one.

The hotel Delizia of Milan, puts on linens, on hand of its customers, a range width of information detailed and images in order to supply to our future hosts all the instruments in order to estimate our stay offer in a hotel to Milan. Not only, contacting on linens the reception of the hotel you will come informs to you on the offered ones tourist of the city of Milan. on the events and the manifestations that Milan will have to offer to you in order to render your vacation incredible.

To take a walk for the more unusual routes, to discover the nocturnal life of Milan with its premises of tendency, to render your vacation in lagoon something of various from the usual tourism: we want that our stay offer in a hotel to Milan satisfies all the senses of our hosts.